Every country has its unique and special vegetables.  I had never seen artichoke, kohlrabi, and rutabagas when I was living in Japan.  Even after I lived here, they looked just not right for me .

I didn’t think I was going to use for my cooking.

However I love them now, and now I know exploring new vegetables or any foods is very exciting!

Do you know the long beige color vegetables in front in this photo?

They are so familiar and loved in Japan. Just looking at this photo stimulates my taste buds!

I got these unfamiliar vegetables at the special event held by Japanese organization.

I think you could find them at some Asian grocery stores, but surprisingly I found them  at Whole Foods a few days ago!

They didn’t look like the ones I could get in Japan, though.

They were thinner and called BURDOCK.

Yes, they are BURDOCK, and we call them GOBO in Japanese.

Those beige vegetables might not look attractive to you, but how about the ones with sesame in this photo.

Maybe not, but they look much better than the ones before cooked, right?

They look delicious at ;east for two people, me and my husband who enjoyed them in this day’s OBENTO.

GOBO has lots of fiver as you could imagine, so we can not eat as raw, but if we boil or saute well, we could use for anything even in salad!

It has lots of harshness, so you may want to put them in the water before cooking to remove it. When we do that,  put a little bit of vinegar.  That helps GOBO being white.

(Recent study shows we don’t need to do that because when we put them in the water, we also lose its antioxidant elements along with its harshness.)

I know you may not get interested in trying to cook GOBO, so I will introduce the sauce I used for GOBO today.

You could use this sauce for other vegetables or cooked chicken breast.

This sesame sauce is also typical flavor of Japan, so ,,,

I HAVE TO INTRODUCE TO YOU!

Here I have a traditional mortar.  I got this from an old lady I respect.

If you don’t have any kinds of mortars, you can do with grinders or mini food processors, but in that case you need to be careful with the timing you stop.

Here are the other ingredients you need.

(I used vinegar here because it goes well with GOBO, and also vinegar is good for keeping OBENTO fresh.

First we need to roast sesame to enhance its flavor.  You could use a small pan and roast it until the flavor comes out.

Do not over grind!

Leave some sesame seeds as whole.

(if you use an electric grinder or a food processor, you have to pay attention to the timing!

Otherwise it gets paste!) 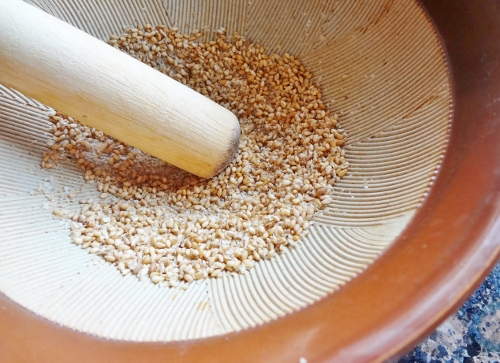 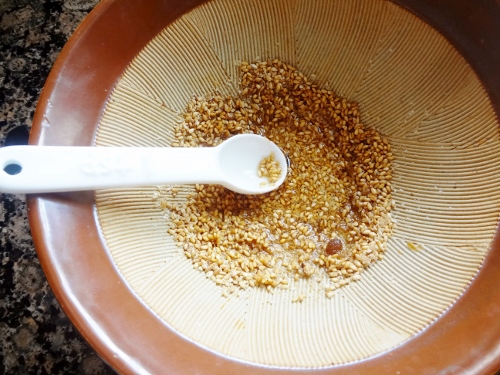 Then add other ingredients.

You could soak any vegetables in this sauce such as steamed spinach, boiled broccoli, boiled green beans, boiled carrots, fresh tomatoes, and ,,,,,anything!

If you don’t like sour taste,  you could just omit vinegar.

Just ground sesame, soy sauce and sugar changes any vegetables to a quick Japanese side dish!

It takes time for GOBO to absorb this sauce, so I boiled it in advance in Dashi  with sugar , vinegar, and light soy sauce.

Do you want to try GOBO or at least this sauce?

I hope you would love it!

Or if you could come up with other ideas for GOBO like I did my unfamiliar vegetable, artichoke,,,,

One thought on “GOBO ( BURDOCK) and SESAME SAUCE”