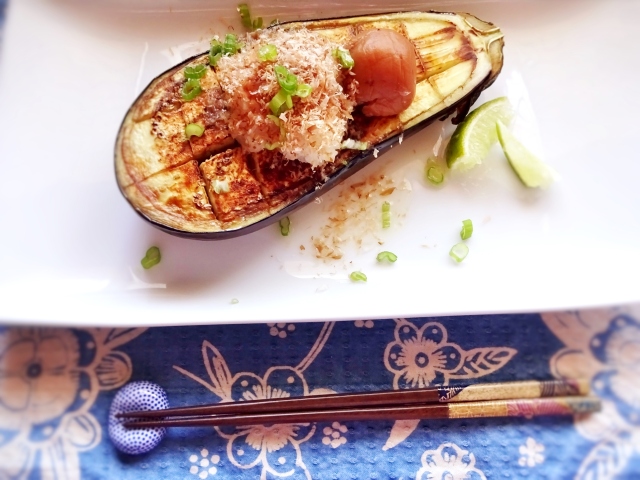 I came to the US 15 years ago, and it was my first experience to live in a foreign country.  Sorry to say this, but I thought people in the US only had hamburgers, pizza, and hot dogs.  When I saw people eating SUSHI rolls with chopsticks, I was so surprised and impressed.  Now we have more varieties of international foods here and we can find any ethnic vegetables or condiments in most of grocery stores.  By the way I thought  familiar vegetables for me such as green onions, ginger, and okra all belonged to Japan.  It was several years later I found out okra is originated in Africa!  Eggplant is one of vegetables which I though is JAPANESE.

People here make Eggplant parmesan and baba ganoush and more.  In Japan as well there are many eggplant dishes.  We often saute or steam them.  We pickle them.  Eggplant doesn’t  have strong flavor, that is why they are very versatile, I think.

One of my favorite ways to cook them is a saute/steam method.  After burning it on the pan, put a lid on and steam it.  It is so easy and you could put anything adds-on  depending on your favor.

Now I would like to introduce how to do that even though there are not so many processes.

Here are the ingredients example. 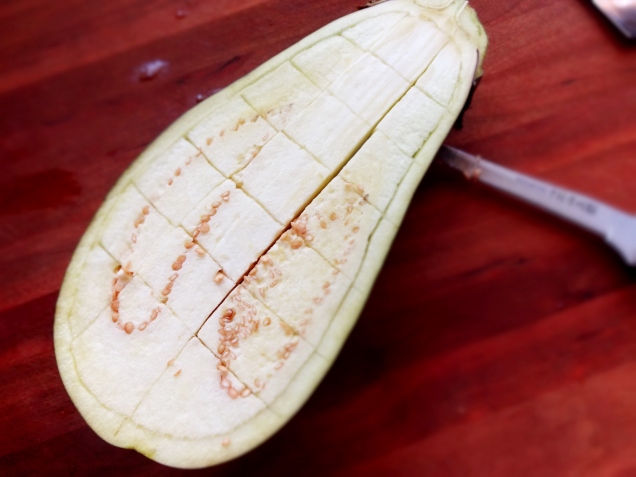 1.Wash eggplant well, and using paring knife (I used a knife for grapefruit! This works so well!), run it along the inside of the skin. (not cut through!).  Then make a square-cut inside the line.

2.Heat the pan and add vegetable oil.  Put a half of the eggplant cut side down (if you make two of them at once, you could put two together.)  Saute in medium heat for about 3- 4 minutes until it gets burned-markings.

3.Flip it and put a lid on and keep cooking for about 7-8 minutes. (This is a steeming process. Since eggplant has lots of water in it, you don’t need to add liquid here.)

You get soft juicy, but not too mushy eggplant.  Now you could put anything on it.

I put grated daikon radish, bonito flakes, green onion, along with a huge UMEBOSHI, a pickled plum.  Then I poured soba tsuyu on top.

I know it is a bit hard to find bonito flakes, Umeboshi and soba tsuyu, so you could just use grated daikon radish and soy sauce!  You may want to have citrus flavor, so use lime or lemon.

This is so good.  My husband loves this.  He doesn’t know how easy it is to make this dish!

That is the best part!

2 thoughts on “The Easiest Eggplant Dish Ever!”